Girl Guides Race to the Finals of National Robotics Competition 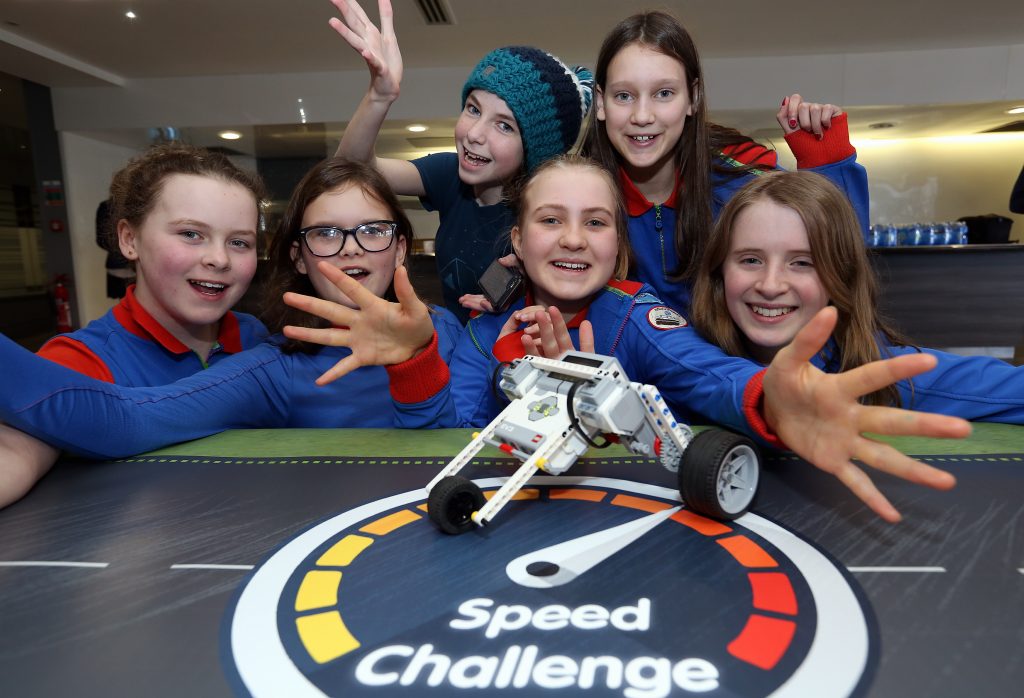 Young engineers will fly the flag for North East Girl Guiding in the finals of the Tomorrow’s Engineers EEP Robotics Challenge after winning a unique heat.

Over 100 guides from across the region designed, built and programmed robots with LEGO Mindstorm and then went head-to-head at Reece Group’s Armstrong Works.

The three top teams of 3rd Hexham, Morpeth and Division B (North Tyneside) will now join other winners from across the UK and compete in the final at The Big Bang Fair on Friday 15 March.

3rd Hexham Guides also had an extra reason to celebrate as their robot recorded the fastest time in the competition so far.

North East Girlguiding has teamed up with the Reece Foundation and EngineeringUK on a two-year project that aims to inspire more girls to consider careers in STEM.

All the 200 guides taking part in the heats, which involves a speed challenge and a humanitarian mission with the RAF, will receive a new “Robotics Challenge” badge – reflecting Girlguiding’s commitment to developing the skills relevant to today’s young women.

Just 12% of engineers in the UK are female – the lowest percentage in Europe, according to research by EngineeringUK.

The 2016 Girlguiding Attitudes Survey found that 52% of over 1,000 girls (aged 11-21) felt that STEM subjects have the image of being more for boys and 41% agreed that there are too few role models working in STEM-related careers.

Now in its second year, the project has been praised by Guides and their leaders for bringing STEM to life and challenging attitudes towards engineering as a career. It is now hoped the scheme will be rolled out to Girlguiding nationally.

Three of the team from 3rd Hexham Guides reached last year’s Big Bang Final and are determined to beat their performance this year.

Helen Bruce, leader 3rd Hexham Guides, said: “It has been a fantastic experience for the whole unit and we are so proud of the team for their hard work, commitment and resilience.

“We started from scratch in a tech-free church hall with very little knowledge about robotics – but they have thrown themselves into it with so much enthusiasm. We have also had lots of support from parent helpers.

“It has given them the chance to learn a lot of news skills and it has been brilliant to see them grow in confidence.

“They also had the chance to work with female engineers and it has really opened their eyes to what a career in engineering involves – such as getting creative and solving problems.

“They all now say that they can see themselves having careers in engineering.”

Team member, Rose Nicholson, 12, said: “It’s amazing that we have got the fastest time so far and we’re in shock! It’s the same robot as last year, but have looked at what was not working as well and made lots of improvements.

“I’ve really enjoyed finding out more about all the different sides to engineering and how it is about finding new ways to solve problems.”

EngineeringUK’s Director of Tomorrow’s Engineers, Melanie Washington, said: “Engineering shapes the world we live in and the way we live our lives and we want all young people to see that they could play a part in that in the future. Tomorrow’s Engineers EEP Robotics Challenge aims to help young people from all backgrounds understand the variety, excitement and opportunity presented by an engineering career.

“There is an obvious synergy between our mission to inspire tomorrow’s engineers and the Girlguiding mission to give girls and young women, whatever their background, the chance to do amazing things. We hope their experience of all aspects of the Robotics Challenge, from design and programming, competing and working as a team inspire them to consider engineering in the future.”

“The guide leaders, who are all volunteers, built this challenge into their weekly programmes to enable the girls to learn a new skill and take part in this competition.

“All involved have shown great determination and commitment to this challenge and we have received lots of positive feedback from the units, with comments including that some of the girls are now saying they would like to be engineers.”

Reece Foundation was established in 2007 by the late Dr Alan Reece. Its main objective is to increase the long term and sustainable prosperity of the North East of England primarily through the promotion of engineering and manufacturing.

“By giving girls the opportunity to get involved with STEM activities at an early age and work with female engineers we hope to ignite that spark of enthusiasm that will encourage them to find out more about careers in engineering and related careers.”